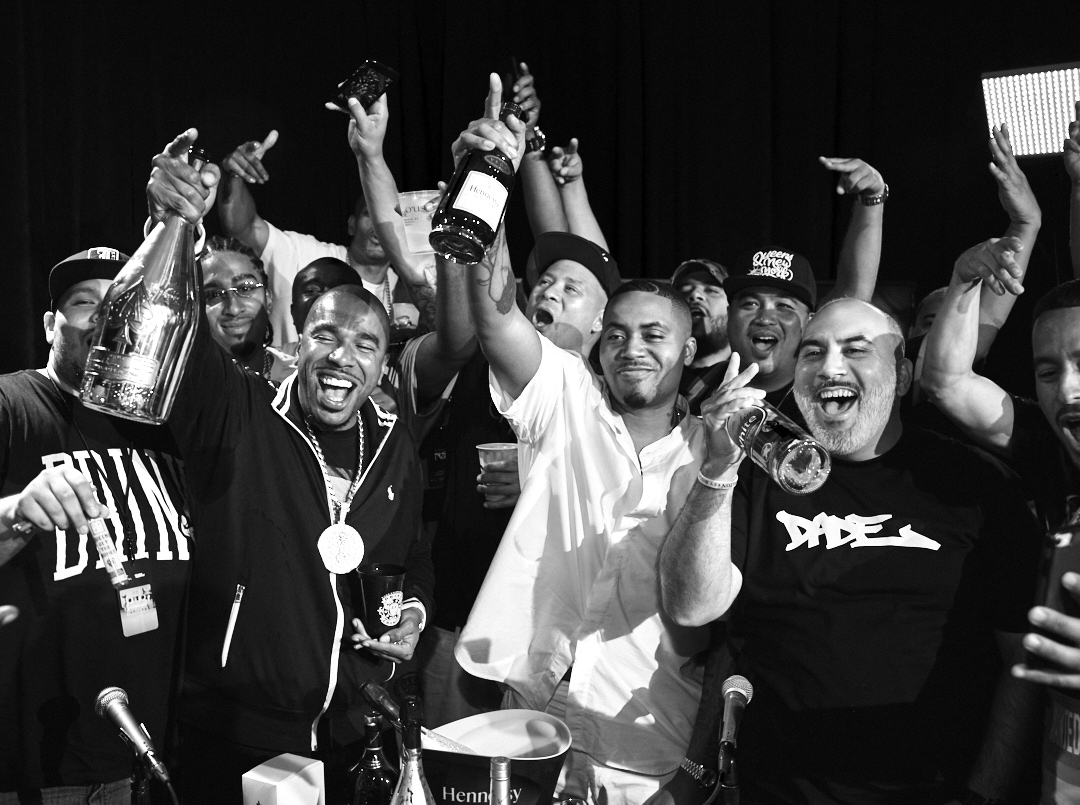 On July 19th 2019, N.O.R.E. and DJ EFN aka Drink Champs sat down with the legend NAS for an exclusive interview during the release party for his new album “The Lost Tapes 2”. During this recording a special announcement was made…

New York – July 23, 2019 – In an unprecedented show of unity in the otherwise competitive spaces of Hip Hop and digital content, media powerhouses REVOLT, TIDAL and Mass Appeal, have announced a multi-platform collaboration with N.O.R.E., (one half of the iconic Hip Hop duo, Capone and N.O.R.E.) and legendary Miami based DJ EFN, for the wildly popular Hip Hop show, Drink Champs. This new venture will present exclusive Drink Champ content across the REVOLT, TIDAL and Mass Appeal platforms, beginning with podcast episodes premiering August 13 exclusively on TIDAL.

“We couldn’t think of a more culturally relevant podcast to host on TIDAL,”, says Jason Kpana, SVP Artist Relations at TIDAL. “NORE, DJ EFN and all of the guests that grace Drink Champs set are such an integral part of hip hop culture, we’re honored.”

This week’s episode featuring Nas is now available across all partner platforms. TIDAL fans can watch pre-paywall on tidal.com/Drinkchamps; media can embed using the code here: http://tdl.sh/DC169V . REVOLT viewers can access the full episode here: https://youtu.be/XU-EBYK3YvY and the Podcast is available via Mass Appeal and powered by Endeavor Audio: – https://megaphone.link/END2544349136

Created independently in 2015 then acquired by Revolt TV in 2016, “The Most Professional Unprofessional, Podcast”, allowed Hip Hop legends the platform to share never before heard stories of raps golden years and preserving the history of the world’s most influential music and culture.

“I’ve always maintained that I represent for the DJ’s, the street team soldiers, the people behind the scenes and most importantly the people who live and breathe all aspects of the culture and this new move allows me to represent that even more and be an advocate for b-boys and b-girls!”says DJ EFN.

A few of the show’s early guests and supporters include: Snoop Dogg, Diddy, 50 Cent, LL Cool J and TI to name a few. “I wanted to stay with the culture and be we’re i’m appreciated. I’m happy to announce our new partnership with Mass Appeal and Tidal and Revolt. We wanna bring u the purest most realist Hip hop show that is for Hip hop and made by Hiphop thank u and we look forward to making more history.”says N.O.R.E.

“REVOLT is tremendously excited for this partnership. Drink Champs continues to boldly push boundaries and discuss real topics with Hip Hop culture’s legends. N.O.R.E. and DJ EFN are part of our family so we proudly support this organic alliance – three cultural innovators continuing to break through the noise with necessary conversation” – ROBYN LATTAKER-JOHNSON, Head of Content and Development, REVOLT

Already promising to be one of their strongest seasons yet, upcoming episodes feature: DJ Khaled, Jeezy, Master P, Angie Martinez and more. This new venture will present exclusive Drink Champs content across the REVOLT, TIDAL and Mass Appeal platforms. “Not only do we advocate that hip hop celebrate itself but in partnering up with these Hip Hop giants (Nas – Mass Appeal, Puff – REVOLT, and Jay – Tidal) we are extremely proud to be part of a movement of hip hop controlling its business.” says DJ EFN

“Drink Champs is exactly the kind of program that fits with the Mass Appeal family – its raw, real, and unapologetic. We couldn’t be happier to be a part of this incredible series,” says Mark Grande, VP of Digital & Ventures at Mass Appeal.

Mass Appeal and Endeavor announced their podcast partnership in September 2018. Current releases include the audio documentary about Freaknik, a celebratory spring break party started by the glitterati of African American college students and the re-launch of Juan Ep hosted by Peter Rosenberg and Chipha Sounds.

Mass Appeal is an entertainment company on a mission to represent multicultural perspectives on a global scale. Since 1996, the brand has been documenting youth-born movements worldwide. Today, Mass Appeal is the dominant voice in hip hop culture. The company continues to elevate the conversation through premium, integrated offerings in original content, music, creative services and digital media.

TIDAL is an artist-owned global music and entertainment platform that brings artists and fans closer together through unique original content and exclusive events. Available in 53 countries, the streaming service has more than 60 million songs and 250,000 high quality videos in its catalog along with original video series, podcasts, thousands of expertly curated playlists and artist discovery via TIDAL Rising. With the commitment of its owners to create a more sustainable model for the music industry, TIDAL is available in premium and HiFi tiers—which includes Master Quality Authenticated (MQA) recordings.