N.O.R.E. & DJ EFN are the Drink Champs. This week we welcome Elliot Wilson and Brian “B Dot” Miller from Rap Radar! Elliot & B.Dot share the origin story of Rap Radar. As Elliot shares stories about his days at The Source and XXL. B. Dot talks about bringing credibility back to the music, in his role as Lead Music Correspondent at MTV.

We also touch on topics such as “gate keepers” in Hip-Hop, Elliot’s love for competition and the fight between Wale & B.Dot that almost happened!

We also get a gem from Rap Radar as they share the story of how their JAY Z interview came to be and much much more!

*Special shout out to Elliot Wilson on his new role @ TIDAL as Chief Content Officer!* 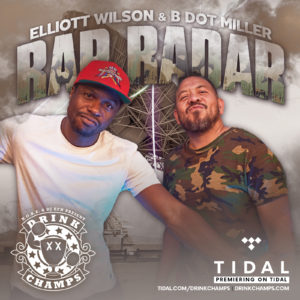