N.O.R.E. & DJ EFN are the Drink Champs. DC Alumni Curren$y stops by to chop it up with the Smoke Champs *cough cough* Drink Champs! Curren$y aka Spitta Andretti is a legendary Hip-Hop Recording Artist. Once signed to No Limit Records, Cash Money Records, Young Money, Warner Brothers, Def Jam and the legendary Roc-A-Fella; Curren$y has been associated with Rap’s elite.

One of the few artist to develop an incredible cult following, his Jet Life fan base has grown with him throughout his career! In this episode Curren$y shares a lot of gems with us. As an entrepreneur Curren$y talks about growing as a businessman by investing in his new business venture “Life Burger” a burger spot located in the historical Mid-City, New Orleans.

Curren$y shares the benefits of working with one producer on multiple records and the chemistry he’s developed with Smoke DZA. Curren$y also announces his upcoming podcast with Smoke DZA! The Champs talk Podcasting 101, providing Curren$y advice and discuss the power of podcasting, by sharing some of their experiences.

As The Champs reveal Drake’s interest in recording an episode of Drink Champs. We also chop it up with Curren$y about this new generation of artists. Curren$y talks about the importance of preserving the art of rap, shown to him by his OG’s. And how the new generation should follow this blueprint as they have responsibilities as artists to preserve the culture as well.

Curren$y also talks about his Jet Life Label, his favorite artists from NOLA, his XXL Freshman Cover and much much more! 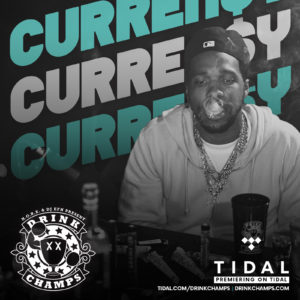