N.O.R.E. & DJ EFN are the Drink Champs. On today’s episode The Champs chop it up with rapper, singer, songwriter and producer Russ! For two and a half years Russ independently released 11 mixtapes and weekly songs. Eventually gaining the attention of major labels, Russ would go on to release his studio album “There’s Really A Wolf” which would gain Platinum status.

In this episode Russ shares stories about creating music at a young age, being influenced by G-Unit, Shady & Aftermath. Figuring out how to garner attention via social media and SoundCloud, Russ breaks down the concept and strategy behind his 1 song albums.

Sharing his views about using substance abuse as a marketing tool, Russ also discusses his controversial “Anti-Drug” t-shirt and how drugs have impacted and influenced the young generation of artists and their listeners.

Lots of stories, debates and gems in this episode that you don’t want to miss! 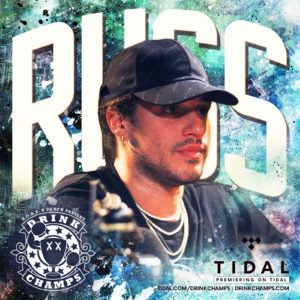