Bleek shares how he’s looked up to JAY Z since a very young age and how a personal conversation with Hov changed his whole life. Bleek shares stories about creating his classic debut album “Coming of Age” and gives his opinion on what caused the end of Roc-a-Fella Records.

As the D’USSÉ shots keep pouring N.O.R.E. and Bleek reflect back on receiving “Pimp” awards. The Champs and Bleek also discuss a variety of topics such as working with legendary producers, growing older in hip-hop and traveling the world.

Memphis Bleek shares stories about working on films such as “State Property” and “Paper Soldiers” alongside Kevin Hart. Bleek also admits to starting the legendary battle between JAY Z and Nas and much more! 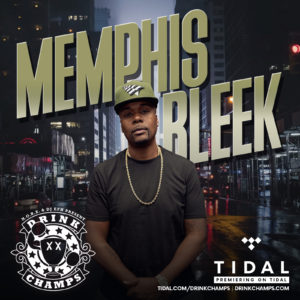