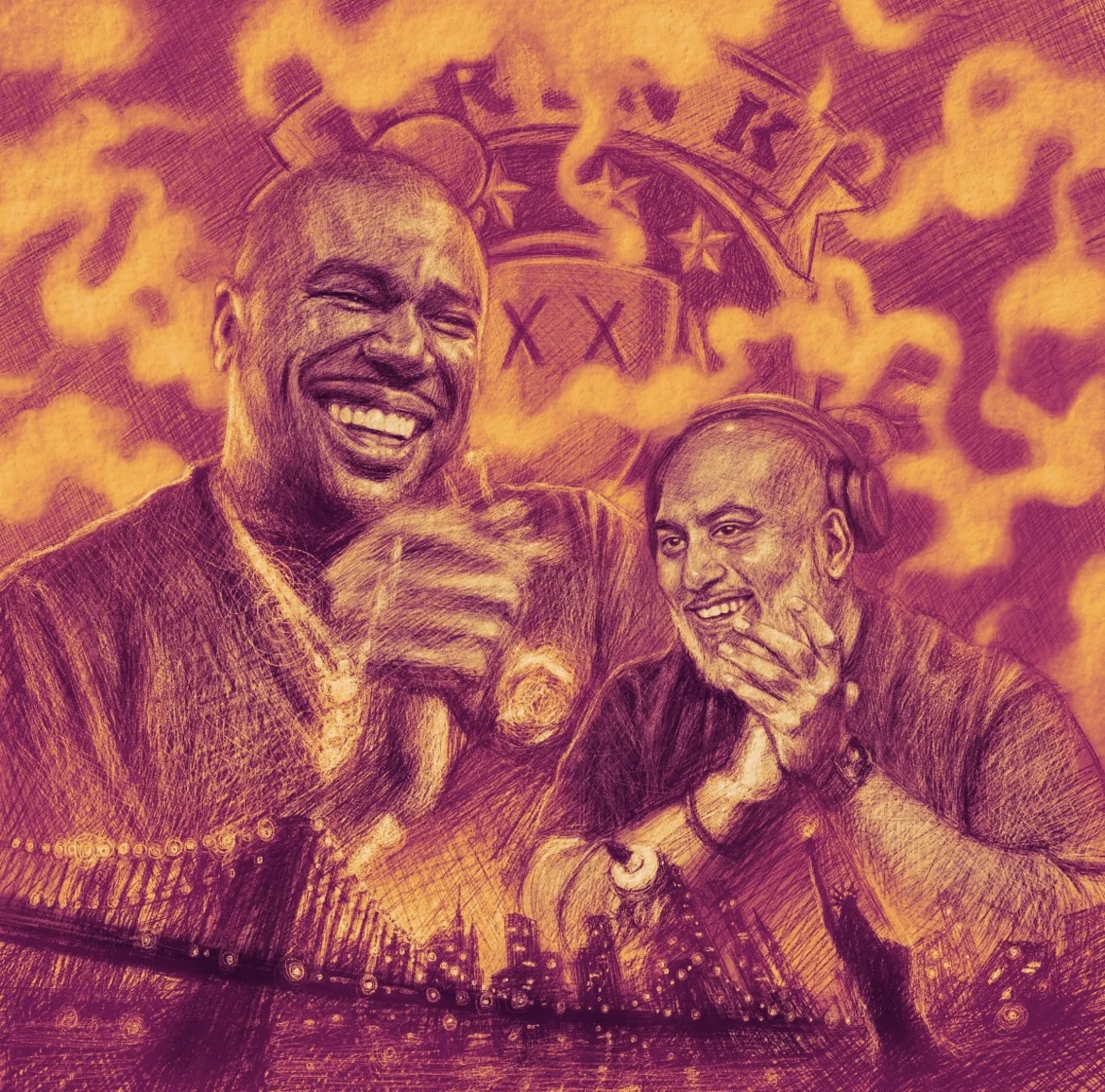 The Good Spirits of “Drink Champs” | The New Yorker

October 7, 2022 JAE HAVANA Comments Off on The Good Spirits of “Drink Champs” | The New Yorker

In the course of a typical episode of “Drink Champs,” which can run two or three hours, a few things will happen. N.O.R.E., the bawdy Queens rapper turned podcaster, will slowly get drunk.

He’ll tell his interviewees, most of them rappers and producers, how much he appreciates them—that he’s a fan as well as a peer—as he probes them about the minutiae of their careers. And his guests, who are often known for their steely, impassive façades, will break into an appreciative, almost goofy laugh. They will seem happy and free.

“Drink Champs” is one of the most popular music podcasts around, despite the episodes’ exorbitant length. Its success flows partly from its A-list guests, who are drawn from hip-hop history: Grandmaster Caz, Lil Wayne, Snoop Dogg. N.O.R.E. gets interviews that most people can’t. In November, Kanye West, amid intensifying rumors about his mental health, appeared on the show for more than three hours, talking about creativity, the paparazzi, his family, and criminal-justice reform. N.O.R.E. pressed him on politics—his relationship with Donald Trump—but also gave him room to riff on dinosaurs, the beauty of humans (“We are God’s ultimate iPhone,” West said), and which of his twenty-four Grammys he’s peed on. N.O.R.E. has been releasing records since the nineties, and his guests tend to shed their personae in his presence. After DMX’s death, in 2021, fans turned to his buoyantly happy “Drink Champs” appearance, where he cracks jokes and reminisces about his childhood dog.

The show began in 2016, several years after N.O.R.E. and his co-host, DJ EFN, did a program on Sirius XM. EFN, a longtime Miami promoter, producer, and mixtape d.j., balances N.O.R.E.’s tipsy zeal with a calming energy and basic, context-setting questions. At its best, the show recalls the nineties and early-two-thousands heyday of radio, when hip-hop stars would head to the nearest station to air grievances or set the record straight, in the few minutes available. Today, in the era of Instagram Live and YouTube, the tendency is to go long, share secrets, and let one’s guard down—things that artists such as N.O.R.E. rarely had the chance to do.

N.O.R.E. is well suited to the meandering rhythms of a podcast. He naturally speaks in an off-kilter purr but grows more animated as an episode progresses. He senses discomfort and defuses it; the show’s tone is somewhere between “Fresh Air” and “SMACK,” the two-thousands DVD series that featured uncensored artist interviews. And he knows how to draw out a story, delighting as a guest wriggles and swerves through an anecdote. In one episode, the rapper Ghostface Killah leans into his words as he shares a story of transporting the Delfonics, the seventies soul group, to a studio session—and getting into a shoot-out on the way there. In another, the singer T-Pain describes the time he spilled Hennessy on Beyoncé. N.O.R.E., in disbelief, keeps repeating fragments back to him, stressing how wild the moment must have been. “I’m so fuckin’ awkward, bro,” T-Pain says, laughing.

Many of the most successful podcasts exist in a state of permanent nostalgia. The past is fun to talk about; there’s always a movie or an album turning some nice round number. But hip-hop has long had an uneasy relationship with history. It has endured as a globally vital form precisely because it’s so forward-looking, each generation rendered irrelevant by the next. Like Verzuz, the song-battle Webcast in which artists compete to see who has the best back catalogue, “Drink Champs” is the rare successful attempt to celebrate the genre’s past without romanticizing it.

When N.O.R.E. began rapping under his original stage name, Noreaga, the industry was figuring out how to turn hyper-local tales of hustling and drug-dealing into the stuff of global stardom. There was a cocky sizzle to his voice, and his jagged delivery attested to the fact that he was raw, unpolished, grimy. “The War Report,” the 1997 début he released as half of Capone-N-Noreaga, stands as one of the best albums of the decade. But it took him years to realize that other artists were embellishing their tales, not just narrating experience. “I didn’t know how to exaggerate,” he tells the imposing Philadelphia rapper Beanie Sigel in one episode. Often, the most affecting material in “Drink Champs” involves N.O.R.E. and his guests recalling long-forgotten rivalries, brushes with danger. They are veterans of conflict, thankful to have survived.

The Sigel episode is particularly moving. Sigel’s voice is raspy and strained, the result of a 2014 shooting that led to lung damage. He’s had a tumultuous career—multiple prison sentences, a patchy relationship with Jay-Z, who once vouched for his character in court—and N.O.R.E. asks him difficult questions with a gentle, playful curiosity. “I’m a changed man,” Sigel says with a chuckle, as N.O.R.E. tries to pour him a shot of Japanese whiskey. Sigel enlists his cousin to drink on his behalf, and emanates a serenity that evaded him during his years as a bullying, street-loyal rapper. “I’m the perfect example of when keeping it real go wrong,” he says.

The episode feels cautionary but never moralistic. In its most mundane, digressive moments, “Drink Champs” becomes almost journalistic—an oral history of how the industry used to work, and of how young Black artists tried to figure things out as they went along. In 2017, N.O.R.E. hosted an interview with the Atlanta producer Jermaine Dupri, who has collaborated with Usher, Mariah Carey, and Destiny’s Child. At first, Dupri comes across the way he does in most interviews: cool and passive, even uninterested. But after a few hours—and one too many shots of a Chinese drink called tiger-bone wine—he’s convulsing in laughter, telling off-color stories about a trip to the Dominican Republic that he took with one of his protégés, the rapper Bow Wow. “I’ve seen so much, since I was twelve, that nobody ain’t ever seen,” Dupri says. “It’s crazy that you have to keep all this shit in your body. You gotta give it out.” N.O.R.E., by now extremely drunk, meets this moment of candor with his own confession: “I been holdin’ my pee” for more than an hour.

As N.O.R.E.’s career evolved, and he experienced success with the production duo the Neptunes, he adopted a goofier, more fun-loving approach, less committed to the glowering affect of the past. One of my favorite moments in his career came on “Invincible,” from the 2000 album “The Reunion,” when he rapped about having made a “half-ass” record the year before. It seemed a strange confession. But it was also a moment that had to do with ambivalence and disappointment, rather than pride or pain. It’s the kind of gray-area emotion, expressed with casual frankness, that emerges organically on “Drink Champs,” where friends and enemies talk for so long that they inevitably stumble onto the truth.

In June, the show hosted an episode for the twenty-fifth anniversary of “The War Report.” Capone, N.O.R.E., and other artists who appeared on the album are there; so are members of Penalty Recordings, the then up-and-coming label that released the record. Capone and N.O.R.E. recall meeting for the first time, when they were incarcerated. Tragedy Khadafi, a veteran rapper from Queens, who first suggested that the duo make music together, speaks in long, sometimes bitter monologues. Occasionally, Neil Levine, an older white man who ran Penalty, chimes in to clarify a small detail. They all swap inside jokes and reminisce about the Sbarro downstairs from the studio, attempting to bring listeners into the tiny, meticulous, magical universe they built. They hash out old beefs, make amends, and lament that the industry is now run by “analytics” rather than by curious, passionate A. & R. scouts. At one point, Tragedy, who oversaw the album as an executive producer, addresses Levine. “I gotta say thank you, yo, for giving me a chance, man,” he says. Everyone claps. The episode clocks in at just under five hours.

Published in the print edition of the September 19, 2022, issue, with the headline “Good Spirits.”